In her own words...
Harriet Quimby began her writing career in San Francisco, California but moved to New York where she became an editor and wrote feature articles often accompanied with her own photographs for Leslie's Illustrated Weekly. Here are excerpts from some of her articles as she traveled around the world, and examined her own life as a single woman living in the "Big Apple".

The Week in the Theaters, Feb. 16, 1911; "The Slim Princess," at the Globe Theater
If you happen to feel dull and out of sorts some evening, get a couple of tickets for the Globe Theater and see the three-hundred pound chorus girls dance. If you are not forced to genuine laughter by this weighty quartet, consider your case hopeless. The story of The Slim Princess is rather foolish. Its songs do not scintillate with wit, its music is mediocre; but the chorus girls, both fat and lean, are pretty and saucy and tuneful. Elsie Janis is the slim Princess. I have never been able to discover just why this little actress should head a company. She is pretty and she can dance, but the same may be said of any one of the girls in her chorus. She cannot sing at all, and, happily, she makes little effort in that direction. She does score rather in imitation, but that part of the entertainment, which comes almost at the end of the final act and is over in less time than it takes to tell about it, forms a very small part of the entertainment. However, she has a pleasing personality and is, I dare say, as capable of bearing the burden of stardom as half a dozen other stars now on Broadway.

How Can We Save Our Birds? June 8, 1911
(Interviewing Mr. Hornaday, a wildlife conservationist) For forty years we have been smarting under the national disgrace of the wicked slaughter of American bison. If something is not done, and done quickly, we will be smarting under the disgrace of having looked calmly on while our American birds are being slaughtered and gradually annihilated. The great trouble is there are twenty times too many men and boys who shoot according to law.

If killing (wild game) goes on as it now is going, our grandchildren will see a gameless continent. There are already extinct the great auk, passenger pigeon, Labrador duck, flamingo, Carolina parakeet and threatened are the whooping crane, trumpeter swan, American egret, wood duck, and prairie grouse. But what can we do? The layman can write his protest and forward it to Congressmen and Senators before whom the bills for the protection of birds in various States will appear.

How I Won My Aviator's License, August 24, 1911
The thrill of pleasure with which the eager and anxious university student after years of patient endeavor secures his diploma has been mine. It takes four years of study to win a college diploma. It takes a much shorter time, if you have a competent instructor and if fate deals kindly with you, to secure your license to pilot an aeroplane.

An American Girl's Daring Exploit, May 16, 1912
The [borrowed Bleriot monoplane] machine was shipped very secretly to the aerodrome on Dover Heights, a fine smooth ground from which to make a good start. The famous Dover Castle stands on the cliffs, overlooking the channel. It points the way to Calais. I saw at once I only had to rise in my machine, fix my eyes upon the castle, fly over it and speed directly across to the French coast. It seemed so easy that it looked like a cross-country flight. I am glad I thought so and felt so, otherwise I might have had more 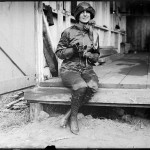 hesitation about flying in the fog with an untried compass, in a new and untried machine, knowing that the treacherous North Sea stood ready to receive me if I drifted only five miles too far out of my course.

It was a cold five-thirty a.m. when my machine got off the ground, the motor began to make its twelve hundred revolutions a minute, and I put up my hand to give the signal of release. Then I was off. The noise of the motor drowned the shouts and cheers of friends below. In a moment I was in the air, climbing steadily in a long circle. I was up fifteen hundred feet within thirty seconds. From this high point of vantage my eyes lit at once on Dover Castle. In an instant I was beyond the cliffs and over the channel, the thickening fog obscured my view. Calais was out of sight. There was only one thing for me to do and that was to keep my eyes fixed on the compass.

The distance straight across from Dover to Calais is only twenty-two miles, and I knew that land must be in sight if I could only get below the fog and see it. So, I dropped from an altitude of about two thousand feet until I was half that height. The sunlight struck upon my face and my eyes lit upon the white and sandy shores of France. I felt happy. Rather than tear up the farmers' fields [below] I decided to drop down on the hard and sandy beach. A crowd of fishermen came rushing from all directions toward me. They were congratulating themselves that the first woman to cross in an aeroplane had landed on their fishing beach. It was now nearly seven o'clock and I felt like eating breakfast.

Curious Sights in a Famous Cemetery, (Genoa, Italy) April 17, 1907
Not so many years ago, so the story runs, one of the best known figures in the streets of Genoa was that of an old woman who made a living selling chestnuts. She was without beauty, but was gifted with a quality which, no doubt, stood her in better stead - a native shrewdness which enabled her to buy her wares prudently and to sell them with profit. It does not require a large income to live in Genoa, especially when one has not acquired extravagant tastes, so gradually the fortune of the worthy toiler grew, and finally became large enough to be talked about. A lad more noted for his good looks than for principle or intellect, caught the rumor of the fortune, sought the chestnut merchant, and made straight for her heart, which was not long in responding. The subsequent marriage of the pair caused the knowing ones to smile.

After a short honeymoon it was brought to the notice of interested neighbors that the young husband was in search of work. His elderly bride disclaimed all knowledge of the rumored fortune, and said that, as she was almost without a penny, she expected that he too, would put the shoulder to the wheel. Between them a comfortable home might be supported and an occasional evening at the theatre might be enjoyed. Not even yet having given up hope that the fortune would one day appear, the young husband led for a time an exemplary life, but finally patience gave place to discouragement and love's dream was shattered. Several years later the deserted wife died, and like a mushroom in the night, sprang up in conspicuous place in the Campo Santo a handsome monument representing, aside from the plot which it occupied, a snug fortune. The marble statue of life size represents the old lady, dressed in full-gathered skirt, silk apron, fringed shawl, and a rosary wound around her fingers. Lest there should be a doubt about the history of the original and her romance, the entire story is set upon the pedestal of the statue, explaining how the lady had been wooed, not, as she knew at the time, for her beauty or her virtue, but for her fortune, and how she had thwarted her mercenary lover by the purchase of this lasting memorial, which not only represented her husband's disappointment, but might also serve as a warning to others. The statue is one of the most striking in the entire place.