Join IWASM and Loganberry Books as they welcome Astronaut Samantha Cristoforetti for a special virtual event on Sunday, October 17, 2021 at 1:00 p.m. EDT. She will discuss her book Diary of an Apprentice Astronaut in a conversation moderated by IWASM Trustee and Space Advisor, Marcy Frumker. Selected in the 2009 European Space Agency (ESA) astronaut class, the Italian 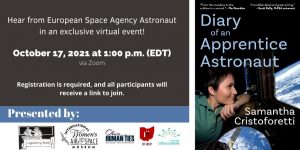 Cristoforetti is set to launch aboard the SpaceX Crew-4 mission in spring 2022. She will become the first ESA female commander of the International Space Station (ISS) during her upcoming space flight next year. During her first mission in 2014, Cristoforetti spent 200 days in space – setting the record for longest duration in space by a female astronaut at the time. In her book, she provides an intimate account of her first journey to the ISS, and guides the reader through becoming apprentice astronauts themselves.

The event will take place via Zoom. Registration is required and all participants will receive a Zoom link to join.

Registration is by minimum donation of $5. Donations go toward furthering IWASM’s mission to preserve, educate, and inspire communities about the impact of women in all areas of aviation and aerospace.

Buy and support your local bookstores! Books may be purchased ahead of time at the time of registration through Loganberry Books. IWASM members will receive 10% discount with promo code. 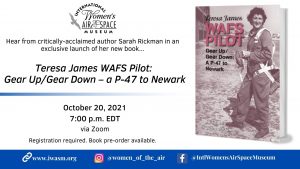 she discusses her experiences interviewing Teresa James in 1999 and James's experiences flying during the Second World War.

Registration is required. Attendees will receive a Zoom link to join the program. The event will be recorded and made available to participants at a later date. Cost is a suggested $10 minimum donation which goes to directly support the International Women's Air & Space Museum.

At the time of registration, get your copy of Rickman's newest book and snag an exclusive bundle deal for all Young Adult books! Also available is Rickman's advanced reader The Originals: The Women's Auxiliary Ferrying Squadron.

Corks on the Concourse Returns for 2021!

Friday, September 3, 2021 from 6:00 p.m. - 9:00 p.m. EDT
IWASM is pleased to announce the much-anticipated return of Corks on the Concourse! This signature event will take place at Burke Lakefront Airport the day before the return of the Cleveland National Air Show. This year, we will host the event both in person and virtually. The decision to host a hybrid event was easy as we know folks have enjoyed engaging with the museum in fun, new, and exciting ways from where they are across the globe. 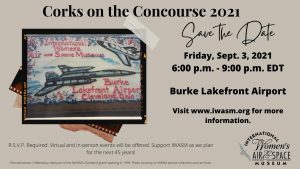 Dinner with a Slice of History World War II Women in Aviation: An Exploration in Leadership

The International Women's Air & Space Museum (IWASM) is pleased to announce the return of Dinner with a Slice of History, a program made possible through a Cuyahoga Arts and Culture (CAC) grant.

During the Second World War, the Soviet Union and United States established segregated organizations for the purpose of recruiting and training women for aviation duties. In both nations, it was individuals, rather than the military establishment, who proposed and developed plans for the use of women aviators. The women who spearheaded those efforts had dramatically different leadership styles, from Marina Raskova’s quiet, businesslike, and approachable character, to Jacqueline Cochran’s brash, forceful, and sometimes antagonistic nature. Yet they employed strikingly similar methods to achieve their goals. In this presentation, Professor Reina Pennington will examine the parallels and differences in the lives and achievements of these two remarkable women. 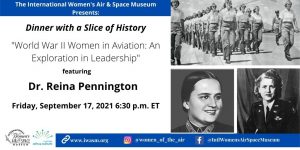 Pennington is a former Air Force intelligence officer; she served as a Soviet analyst with F-4 and F-16 fighter squadrons, the Aggressor Squadrons, the Defense Intelligence Agency, and the Alaskan Air Command. She is the author of Wings, Women and War: Soviet Airwomen in World War II Combat, and is presently working on a book entitled What Russia Can Teach Us About War.

Join IWASM as we celebrate the 60th Anniversary of the Mercury 13, and Wally Funk's next record-setting flight! On Tuesday, July 20 starting at 7:30 a.m. EDT, coverage begins of the Blue Origin launch. Wally Funk, the youngest participant of the 1961 Women in Space Program will finally achieve her life-long dream of space exploration. 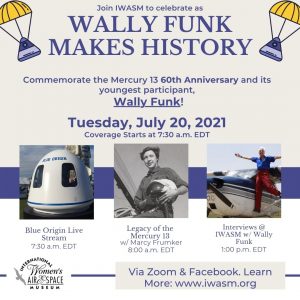 To celebrate, the museum will host a series of virtual programs via Zoom and streamed to Facebook. 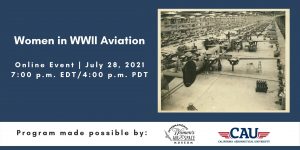 the vital roles women played during the global conflict. From manufacturing to nursing, to research and other facets of aviation, this program will shine a light on not only American women's experiences during the war and aviation, but international connections.

The event is free and open to the public. Donations are appreciated as they enable IWASM to continue its vital work of providing relevant, engaging, and accessible programs for all.

Registration is required. Attendees will receive a Zoom link to join the program. The event will be recorded and made available to participants at a later date.

This event is in conjunction with the Women at War: The Women Airforce Service Pilots exhibit currently on loan to California Aeronautical University.

A Brief History of the Women Airforce Service Pilots

During World War II, 1,102 American women flew as part of the WASP – Women Airforce Service Pilots – and were a blend of two groups. In the Fall of 1942, Nancy Love formed and led the Women’s Auxiliary Ferrying Squadron (WAFS) comprised of 28 women who each had a minimum of 500 flying hours. That same year, Jacqueline Cochran was authorized to recruit female pilots to fly Army trainers and were dubbed the Women’s Flying Training Detachment (WFTD). 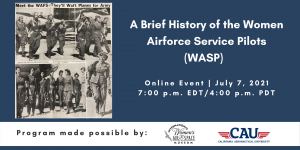 By the summer of 1943, Cochran was appointed Director of all Women Pilots and renamed the WAFS and WFTD as the Women Airforce Service Pilots. Join acclaimed author and IWASM advisor, Sarah Rickman, to learn more about the individuals who made up the WAFS and WASP in an evening of discussion and viewing of the film Six WAFS Up Close and Personal which tells the story of the original 28 WAFS.

This event is in conjunction with the Women at War: The Women Airforce Service Pilots exhibit currently on loan to California Aeronautical University. To learn more, visit www.iwasm.org or email info@iwasm.org.

Defying the Odds: Exploring the Impact of Women and Aviation in the First Half of the 20th Century - VIRTUAL EXHIBIT OPENING

June 30, 2021 at 7:00 p.m. (EDT) via Zoom
Join IWASM staff and Ohio History Service Corps members as we unveil the museum's newest virtual exhibit. Learn about the lives of women like Katherine Sui Fun Cheung, Bessie Coleman, Hazel Ying Lee, and Lotfia El Nadi, and others, the context in which they broke barriers, and hear about the future initiatives to showcase the history of women in air and space. While the guest curators 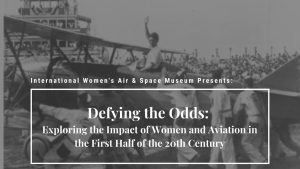 touch on just a handful of women from across the globe, this is the first installment in IWASM's slate of new and appealing ways we are engaging our communities.

Check out the full exhibit here!

58 years ago on June 16, Valentina Tereshkova became the first woman in space. As a way to celebrate, join us for the long-awaited return on Rocket Day at IWASM! The team at the museum and our dedicated volunteers have been hard at work creating a safe and engaging program. Learn about the physics behind rocket and jet propulsion! 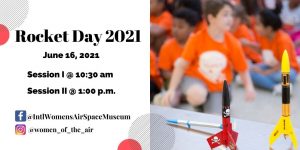 Masks and social distancing will be required. Space will be limited. Participants will be provided with detailed information to prepare for this in-person, outdoor event.
Registration Information:

History of Women in Aviation with Geauga Parks's Skywatcher's Club
April 5, 2021 at 6:30 p.m. (EDT) via Zoom
During this program, join International Women's Air & Space Museum's Executive Director Sara Fisher as we explore the role of women in aviation and aerospace. Participants will learn about their accomplishments, obstacles, and their enduring legacy in all 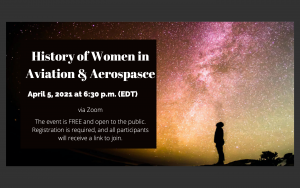 areas of aviation and aerospace. From the first woman to solo a balloon in the 18th century to Bessie Coleman's dream to establish a flight school to the women who briefly called the International Space Station home, this program provides a glimpse into lesser known histories.

The event is FREE and open to the public. Registration is required, and all participants will receive a link to join.
Behind the Collections Door: The Mercury 13

Led by Collections Manager, Katherine Behnke, this program will provide a glimpse into 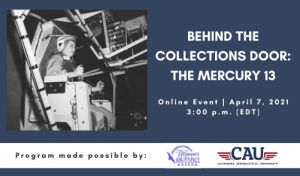 the collections cared for at the International Women's Air & Space Museum. Learn about the women who underwent testing at the Lovelace facility, and who would make history as the first to undergo astronaut testing beginning in 1961. Now known as the "Mercury 13," engage with the history of these remarkable women through the lens of their personal records, flying trophies, and more. This program is in conjunction with the current exhibit on loan to the California Aeronautical University.
This event is free and open to the public. Registration is required and each participant will receive the access link prior to the event. For questions, email info@iwasm.org.
Mercury Women: Forgotten Link to the Future
April 13, 2021 at 7:00 p.m. (EDT) on Facebook Live
"Women can be Astronauts" headlines the extended remarks of West Virginian Representative Ken Hechler on Thursday, March 15, 1962, during the 87th U.S. Congressional Session. 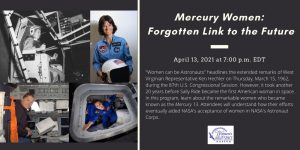 However, it took another 20 years before Sally Ride became the first American woman in space. In this program, learn about the remarkable women who became known as the Mercury 13. Attendees will understand how their efforts eventually aided NASA's acceptance of women in NASA's Astronaut Corps.
This event is in partnership with the Armstrong Air & Space Museum and will appear on both the IWASM and AASM social media.
The event is FREE and open to the public. This program will also be live streamed on Facebook.
Unladylike 2021: Bessie Coleman
April 22, 2021 at 12:00 p.m. (EDT) on WebEx
IWASM is excited to join Lakeland Community College Women's Center for the final event in the Unladylike 2021 series exploring the lasting impact and experience of Bessie Coleman. 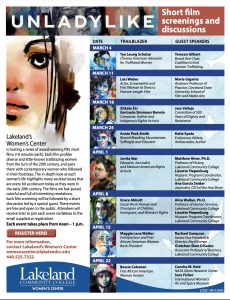 Each program includes a 10-minute PBS film from the Unladylike series, which profiles diverse and little-known trailblazing women from the turn of the 20th century, and pairs them with contemporary women who followed in their footsteps. The in-depth look at each woman’s life highlights many societal issues that are every bit as relevant today as they were in the early 20th century. The films are fast-paced, colorful, and full of interesting revelations.
Each film screening will be followed by a short discussion led by a special guest. These events are free and open to the public
Soaring Above: Cleveland Women in Aviation & Aerospace
March 25, 2021 @ 6:00 p.m. (EST) via Zoom
From the annual Cleveland Air Show to the role NASA's Glenn Research center in the study of space, Cleveland is home to rich aviation and aerospace history. In this virtual program in 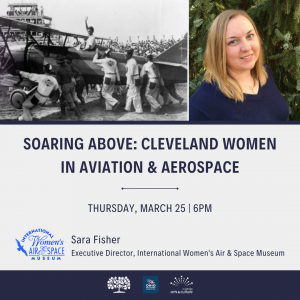 partnership with the Shaker Historical Society, the International Women's Air & Space Museum will highlight the impact and contributions of women from the greater Cleveland area from pilots to engineers to parachutists and more.
This event is in partnership with the Shaker Historical Society and will appear on both IWASM and SHS social media.
February 24, 2021 at 6:30 p.m. - Virtual Meet & Greet

Join Executive Director Sara Fisher for a free virtual meet and greet!
Hear about what's been happening at IWASM, our plans for 2021, and more. Learn about what is in store to celebrate IWASM's 45th Anniversary, the 60th Anniversary of the Mercury 13, and get a chance
to share your thoughts as the organization gets underway with
strategic planning.The event is free and open to the public.  Registration is required. 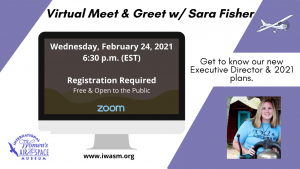 For this *virtual* book talk, Dr. Sullivan will be joined in conversation with Marcy Frumker, Board Member and Space Advisor of IWASM, along with Loganberry Books serving as the main host.